During the election campaign, all channels to reach potential voters are in the focus of the parties. Whether through regional sports clubs, the distribution of croissants at the train station or campaigning stands at all kinds of occasions, the parties exhaust all conceivable possibilities. Social media have also enormously increased the reach of the parties in recent years. They make it possible to reach many people with little effort. For this reason, many candidates for the 2019 National Council elections are represented on Twitter, Facebook and Co. But how many actually? And what do they communicate? We would like to take a closer look at this today and provide some initial answers.

Our inquiry is based on a survey of around 4,400 candidates that we received from Smartvote. In cooperation with the Forschungsinstitut Öffentlichkeit und Gesellschaft, we checked whether the candidates had an account on Facebook, Twitter or Instagram. The result is one of the most comprehensive lists of the online activity of candidates during political elections in Switzerland.

In this first preliminary analysis, we focus on the seven largest parties and their main lists - in other words, where almost all seats for the National Council are distributed. The young and small parties that have no faction strength (e.g. the EPP) are considered under Rest, but as such are not yet further discussed.

At first glance, it's surprising that Facebook dominates the political social media scene in Switzerland. From abroad, especially from US politics, Twitter is known as the primary political communication platform. One of the reasons for the dominance of Facebook is certainly its widespread use among the general population, which is also higher in percentage terms than in the USA. The second most popular social media service is Instagram, a platform that usually attracts younger people. At this point, however, we leave out demographic factors such as age or residence, as specific contributions to these metrics are planned in the coming weeks. For the time being, only the general use of candidates' social media services will be discussed.

The SVP has the smallest gender gap on Facebook

The use of social media differs greatly from party to party, but also within a party between the sexes. SVP and GLP women are more affine to Instagram than candidates from other parties. The female BDP candidates, on the other hand, are strongly represented on Facebook, especially in comparison to their male homologues, who are falling short in comparison between the parties. Among the men, it is the FDP men who catch the eye, 84% of whom are represented on Facebook. The remaining gender distribution is relatively uniform. 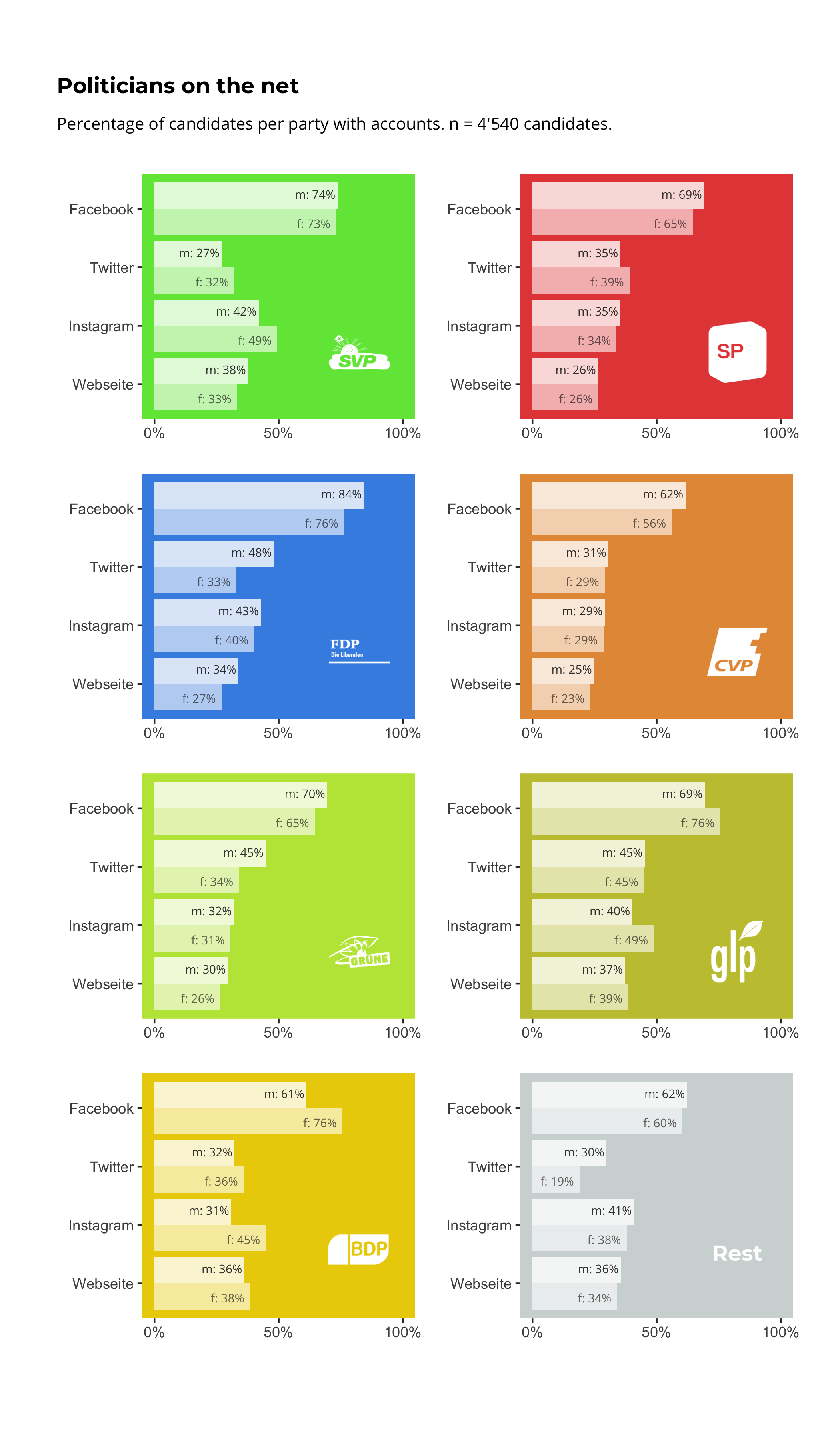 Although Twitter is used far less than Facebook, it is worth taking a closer look at the social media service. On the one hand, Twitter can and may be evaluated automatically, while data access on Facebook and Instagram is more difficult. Moreover, Twitter is very political in Switzerland: many journalists, political scientists and politicians are active Twitter users. Many political debates take place at least partly on Twitter and develop a life of their own in the networks of the users.

Now it is important to clarify which candidates actually have an influence on Twitter. There are different ways to identify the most active or successful Twitterers. As a measure for the success of candidates we use the reactions of other users to their tweets: In a first analysis, we rate those who get more so-called Likes and Retweets, i.e. whose tweets get shared frequently, as more successful. In the following we summed up Likes and Retweets, because there are big differences between the two. There are, for example, users whose tweets generate many Likes, but are not retweeted to the same extent, or vice versa. 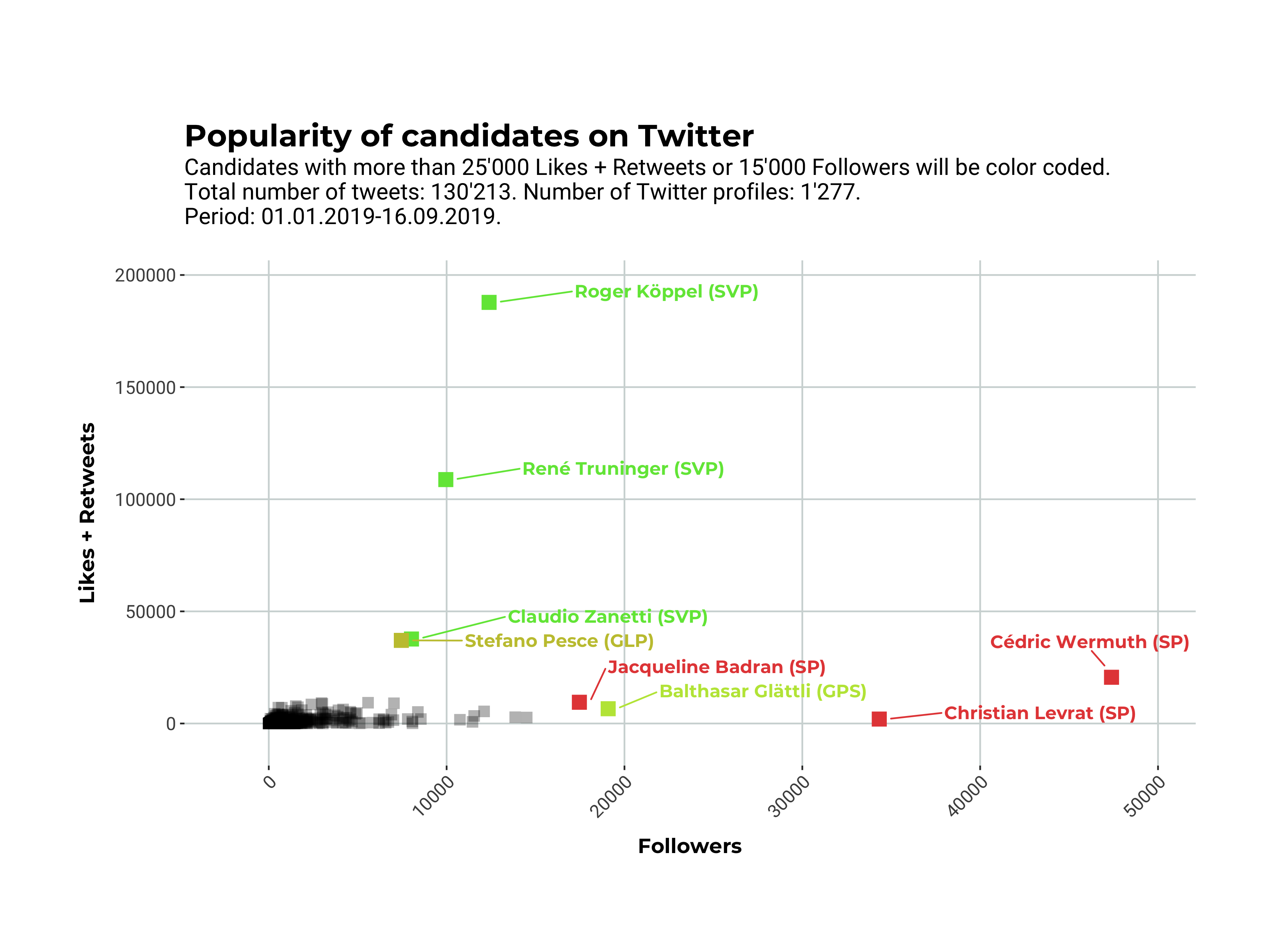 A few candidates stand out clearly. In the graph, those candidates who either have many followers (more than 15,000) or have generated many reactions (more than 25,000) are colour coded. It is astonishing that mainly new politicians meet at least one of these two criteria: Roger Köppel, René Truninger and Claudio Zanetti for the SVP; Jacqueline Badran, Christian Levrat and Cédric Wermuth for the SP; Balthashar Glättli for the Greens and, perhaps most surprisingly, the Ticino Stefano Pesce for the GLP. Roger Köppel with over 175'000 likes and retweets by far is the candidate who gets the highest resonance, despite a not overwhelming number of followers. 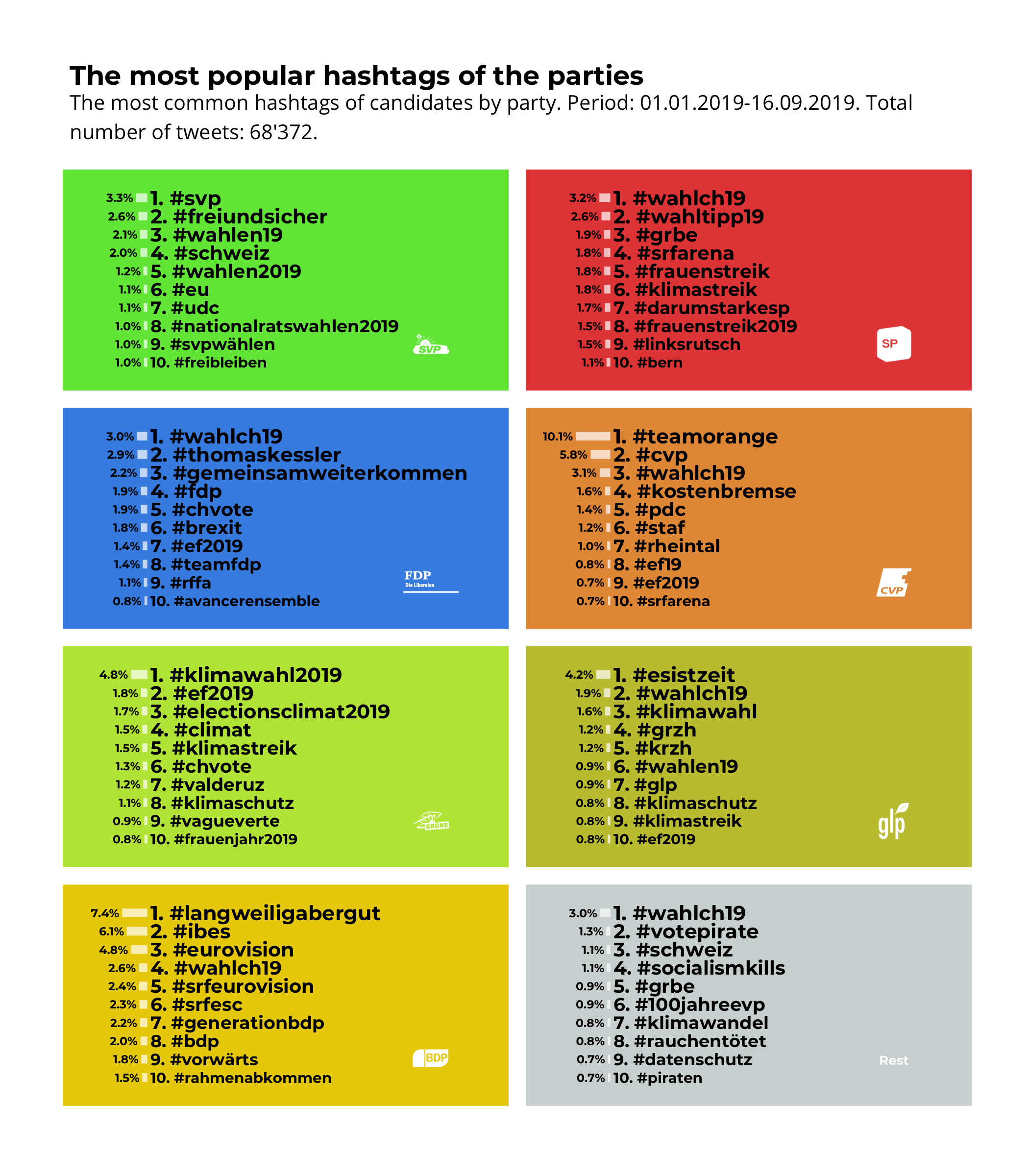 What is important is not only how well the candidates' tweets are received, but also what is communicated. The use of hashtags provides a first insight into what concerns politicians and parties. Each hashtag links all tweets with the hashtag, so that a thematically interested audience can be reached in addition to the own followers. These hashtags illustrate how often politicians try to communicate on a topic - or how monotonous the tweets are. In the next graphics, we will show the top hashtags by party. Instead of only considering the official party accounts, we have aggregated the tweets of all candidates by party and extracted the top hashtags. In addition, we have determined the top users per party for men and women. The shares of the respective hashtags in the top 100 hashtags of the respective candidates are also presented.

It is striking, however, that not all the candidates' tweets are political: For example, #eurovision manages to reach 5th place at the BDP. But also Stefano Pesce, Fabio Hasler or Evelyne Baumberger seem to use Twitter more for private posts. Also Roger Köppel, by far the Swiss Twitter king, uses Twitter primarily for private purposes: 52% of his tweets with hashtags are linked to Weltwoche (#weltwoche). Also #gretathunberg makes it into his top 10 most used hashtags. However, you can't find his party's election campaign slogans there. The situation is different with his party colleague Barbara Steinemann, the top SVP candidate on Twitter, who consistently uses hashtags like #svpwählen and #freiundsiche. By and large, however, party affiliation is clearly evident. Some parties are dominated by party slogans or other clear party confessions, such as the BDP's #langweiligabergut or the CVP with its #teamorange. 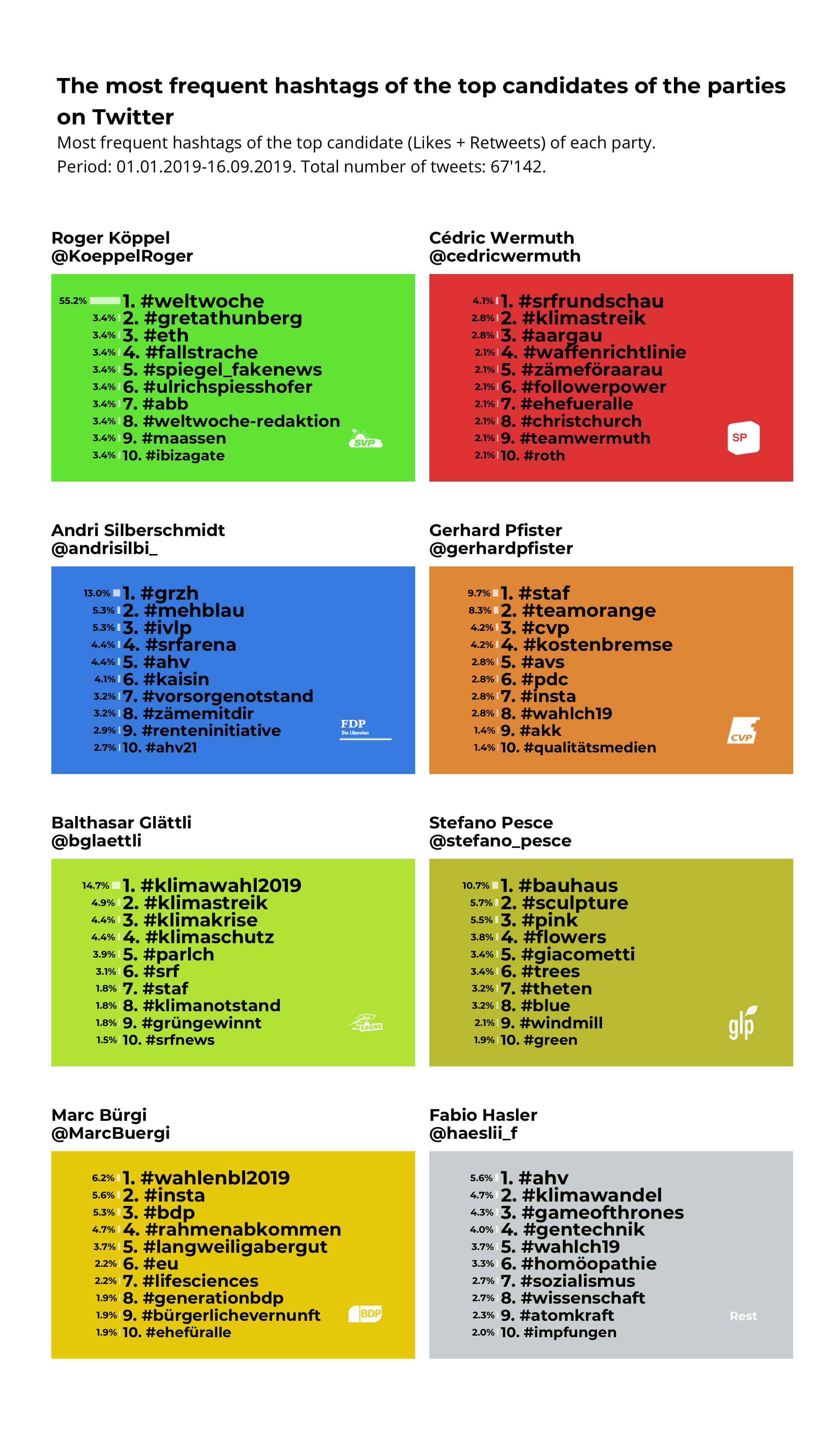 Among the political hashtags, there are a few that stand out: #Frauenstreik was quite popular this year, generally among female candidates and the SP. Climate buzzwords such as #klimastreik, #klimawahl2019 or #klimaschutz can also be found in the top places among the Greens, GLP and SP. #klimastreik is even slightly more common for the SP than for the Greens or GLP. Since our analysis covers the period from January 2019 to the beginning of September, hashtags for cantonal elections and referendums also make it into the ranking. 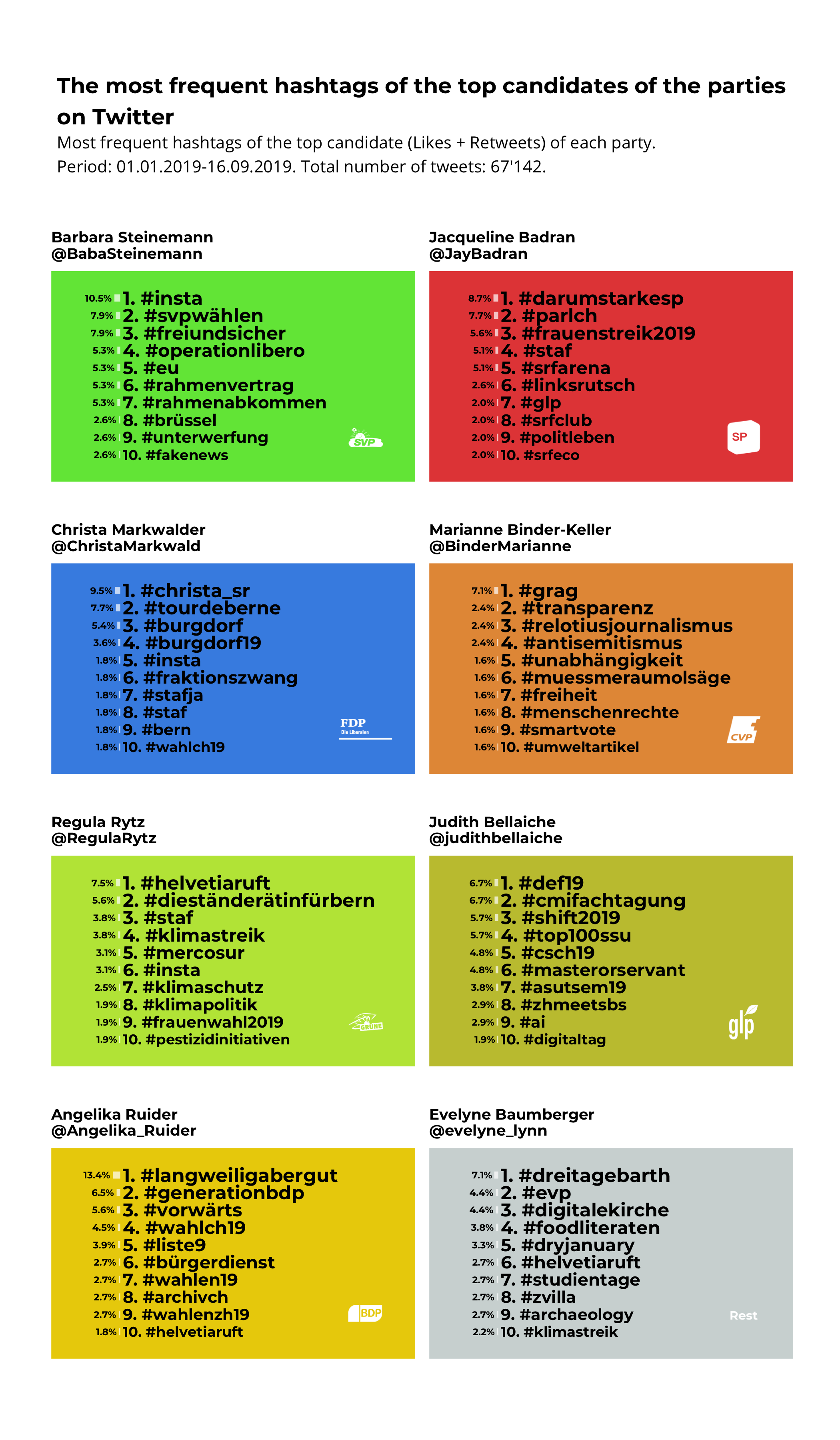